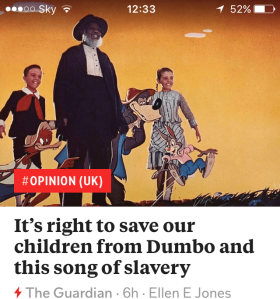 I have a quite battered copy of Disney‘s Song of the South which I taped off the TV when living in Dublin some ten years ago. Occasionally, I put it on and simultaneously cringe at the studio’s usual saccharine cuteness interspersed with a lamenting for the good ol’ days of the Mason-Dixon line when blacks were good enough for a chuckle and a story when needed but knew to keep to the shadows and background otherwise.

I’ve long wanted to write about Disney‘s other titles which don’t figure in its endless re-issuing and re-packaging of its catalogue – the company ranks alongside Motown and Lucasfilm for adeptly milking its cash cows and collecting bucks out of every generation at every turn – as the likes of The Scarecrow of Romney Marsh (1963), starring Patrick McGoohan, are far more interesting than The Aristocats.

So Disney’s decision to not include SotS in its new streaming service is fine by me – as is Ellen E. Jones‘ piece in today’s Guardian as to why the film is problematic for POC, parents and any of us with conflicting views on the film (great songs and decent animation; shite politics and narrative). 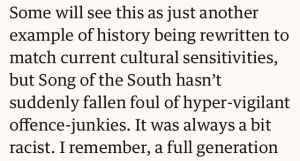 The only ‘offence-junkies’ in existence today are the ones who inspired me to write this (see below).  Jones finishes her piece with the following: 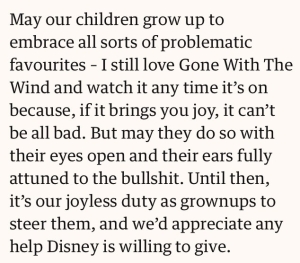 Seek out the full opinion piece – heck, why not splurge and spend the full £2.20 on the paper copy? – and you’ll hopefully agree that Jones makes sense. She is deprecating, informed and realistic, and has done a good job.

Their ‘libtard’ politics might not be liked by everyone, but The Grauniad can usually be trusted regarding the correct and objective use of language. However others can’t be, especially on-line. I read the piece on Apple‘s Flipboard app and then flicked to the comment sections (I know, I know, but it’s cold and raining outside. Maybe I wanted to fire up myself a tad). People and their actions are truly fascinating, right? 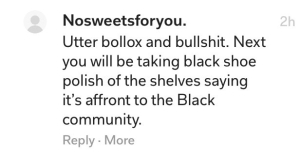 Where and how do you start to unpack this comment? It leaps from Disney making its own decision to Jones’ admission of her family and ethnicity to somehow alluding to (correct) revisionist updates of notorious historical figures in modern day life, and then to shoe polish. Go figure.

Only yesterday I read about Uncle Walt’s grand-daughter making sensible points on the ‘insane’ salary of Disney’s current CEO, Bob Iger; meanwhile the usual spurious and ceaseless drivel is spouted whenever there’s a chance of snark and selfish bile.

I don’t want to comment on these people’s online mantles and what persona they’ve adopted. Zip-A-Dee-Doo-Dah is indeed a fine, happy song (and a necessary bastard of a word to type and check).

Not wanting to engage in digital navel-gazing or starting a bout of ‘friendly fire’ amongst other keyboard warriors, I’m bored and simply sick of the notion whereby opinions prove themselves to be as almost as uniform, ubiquitous and necessary as arseholes – something which must be used in a demonstrative and righteous fashion borne out of fear and misunderstanding.

Why not scream at a wall instead when frustrated at the passing of the old and the arrival of the new? Paint a blackened abstract with large dollops of vermillion applied furiously to show your anger and rage at the way your social constructs and compiled self are being affected?

Let it all seep out, baby. And then try to be nice, perhaps. It doesn’t hurt one bit and it really goes a long way. 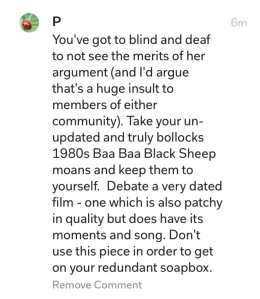